The Boy Who Unlearned

An Open Letter To a Brother

Manjari, From Lucknow to London

“Love art in yourself, and not yourself in art.”

I remember having had a terrible day a few months back. I’m sitting all curled up on this sofa, sipping on some coffee, feeling let down by people around me in the most cliché way, just when a friend phones me, “Bhartendu Natya Academy, 7 p.m. sharp. You won’t regret this. See you!” she said. Since I wasn’t feeling very motivated to do anything else, I got off and actually decided to go for it. I entered about 5 minutes late and hushly got seated. The stage was dark and as it lit up, I saw a girl with messy hair walk up in white. 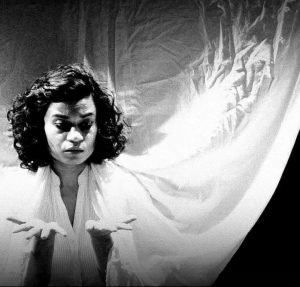 She took me on a journey thereafter. I was so engrossed, I might have hardly taken my eyes off her that evening. She alone played more than 3 characters, she did the props, she played with lights, she seemed to be dwelling on that stage, she was living it. This girl was the mighty Manjari Kaul and this play was a monologue, Chronicle of a Death Foretold, an adaptation of the novella by Gabriel Garcia Marquez, directed and performed by Manjari herself. I became an instant fan. There was something about the way she delivered those dialogues. She makes you a part of the plot, you’re a part of the story. You sit there watching her create magic. It was incredible. I remember everybody being dead silent throughout and the moment she ended the play, there wasn’t one person in the audience who did not stand up and clap for her. I later went up to her to hug her and congratulate her.

I didn’t personally know her but I was proud of her, for being such a beautiful actor, for emoting so well, for doing what she did up on the stage that night. It started thereafter. I started following her through the Internet and on Social Media, and my fangirl-ing knew no bounds. She was like this local heroine, who I felt more than happy belonged to Lucknow and was doing so well for her, across the country and even outside it. 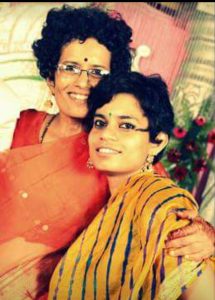 Manjari with her mother, Lakshmi Kaul (on left)

In a small conversation with Manjari, about her life and theatre, recently this week, she told us “My mother enrolled me in theatre workshops as a child which got me started on this journey. I owe a lot to Yayavar Rang Mandal and Lalit Singh Pokhriya, who directed several of the workshops I was part of. I owe a lot to them.”

She went to school at Study Hall, Lucknow and later to the University of Delhi for her Graduation. This is when she pretty clear about what she wanted to pursue in life, for now, definitely.

She later went on and studied Arts and Aesthetics from one of the most prestigious Universities of the country, Jawaharlal Nehru University, Delhi.

“In theatre, I found a space I found joy and comfort in, and that really felt like home. In college is when I probably realised that this was no more merely a  fun summer break activity but something that had gripped my life nice and tight, and was here to stay.”

“I find that it helps me make sense as well as turn sense on its head and indulge in utter nonsense. It is a world of infinite possibilities for me- of imagining a better world. I love the ephemeral nature of theatre- that it’s in the here and now. It gives me the freedom to recreate each time I do the same show again. There are stories that are waiting to be told, some that have been told before but not been retold enough. It is very empowering to be the medium through which these stories find their way. My politics is reflected in the stories I choose to tell and how.” 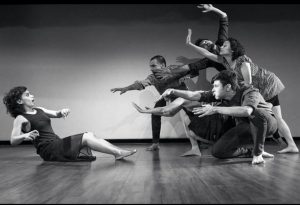 Our journeys are all so far about false starts and restarts. That is exactly how it has been for Manjari but what is beautiful is that she never stops being thankful to her parents for being so supportive. The paucity of funds in the theatre is a well-known fact and in Delhi theatre companies being led by women are in minority. Amidst all of this, she started her own group in 2012 called Improper Fractions. Her Chronicles of a Death Foretold, her one-woman show has now reached London. 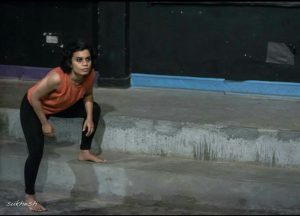 This woman sure is going places, isn’t she? How proud is Lucknow?

“My quest for a language in theatre that I could call my own, is at an interesting station called the Duende School of Ensemble Physical Theatre where I trained and found terrain I was inspired to explore. Performing my first ever solo show (which has since travelled to Delhi, Bangalore and Athens) in Lucknow was very very special and also very scary. I wasn’t sure if I had done justice to everything the city had given me growing up- an artistic sensibility and sensitivity in expression”

Manjari Kaul is a phenomenally courageous woman who carries a vibe to herself that is rare to find, a vibe that inspires you to go ahead and do that ‘something’ you have been longing to do, something that soothes your soul, the something that is your calling.

We wish her all the love and luck. May we keep inspiring each other through this incredible journey of life!

Twenty-five, crass, young and yearning to make a difference to the society. Alisha is a writer and an activist. But beyond all of that, forever a Lakhnavi, a dancer at heart, a free-spirited woman and a feminist.