It was a celebration when we announced the third and final story of the series Stories of Separation. The launch of the Studio Theatre could not have been better. We had a successful run of seven shows of the three stories and managed to get an audience of more than two hundred. We consider that a good number,

keeping in mind that we only possess a seating capacity of thirty people.

The third story, another master experiment in a series of experiments, is about a man who goes on a journey to meet his brother, who had left them years ago and is now living somewhere in the remote mountains. To meet someone with whom he never had a strong connection and discovering the depth of his own emotions, buried under the dust of everyday life and the loud grief imposed through the ritualistic life, takes away 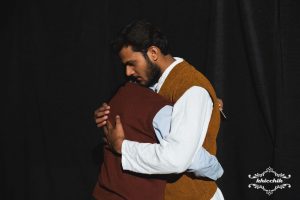 all his strength and the ability to bear reality. He tries to find the scrap of connection he had with his brother in the past but comes up with nothing. The connection between the characters is portrayed more through silence than any words spoken on the stage.

The play was an immense success and despite all our efforts and drawbacks at many levels, the lack of resources, the moment was immense and unmatched. A really proud closing for the wonderful performance.