The Boy Who Wrote

Lucknow Just Got Happier and Braver

Where Did We Go Wrong?

I grew up in Lucknow. There was a temple outside my house. Literally, right in front of my house. Every morning at around 6, there was Gayatri Mantra blaring out on speakers along with other Bhajans. I still remember Gayatri Mantra by heart. I really do. In proper Sanskrit. Every Diwali, I used to be as excited as I was on Holi. My friends, most of which were Hindus, were always enquiring about the dates of Eid for ‘Sewai’ and Bakreed for ‘Biryani.’ Yes, Hindus enquired about Biryani (and Sewai too, but that doesn’t matter when we’re talking about Biryani, right?) and nobody judged them. My mother knew all my friends and they used to touch her feet when they came home for blessings, my mother happily blessed them, she still does. I used to go and stay at my friends’ place and I used to join my hands for a ‘Namaste’ without thinking twice. I still do. I ate ‘prasad’, my friends ate things I had to offer.

I grew up in Lucknow.

Having said that, let me also mention that I was a Muslim back then. By back then, I mean that I am an Agnostic now. Before I go any further, I also want to mention that I did not turn Agnostic recently or owing to the current situations in the country. I turned an agnostic way back when I (personally) realised that one religion can never summarise the power that is running everything around. So I stopped relating religion to everything. Once I did that, all that was left in me was humanity. Everything was either right or wrong. Everything was good, or bad. Nothing was green, or orange, or any particular colour whatsoever. 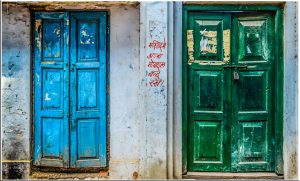 Back to reality – 2017, and I’m seeing green and orange everywhere. Things have changed. People ask for names, then they ask for surnames if your name doesn’t clarify your religion. Where did this radicalisation come from? Why is the society ganging up? Where is humanity? What about the harmony that prevailed? Lucknow was the hub of the so-called ‘Ganga Jamuni Tehzeeb,’ Where did we go wrong?

Politics? Yes. Politics is where we went wrong. Not BJP, not Congress, not AAP. None of them in particular. The entire political scenario in the country is where we went wrong. People haven’t realised that they’re being fooled by not one, but all of them sitting in power. It has been going on for 67 years and people still haven’t realised that the sole power lies in their hands. Voting doesn’t end our responsibilities as a citizen, it starts from there.

People, you and I, we have to take control because the self-centred politicians are still following the divide and rule policies. While the media highlights something that is not relevant at all, the politicians make a backdoor entry and are making their lives easier. It’s not going to end. “Chalta hai, thode din ka hai”, “minor inconvenience hai” has brought our country to this state. A state where roads and flyovers and parks are built on papers while the citizens just humbly opt for an alternate route with lesser potholes without questioning the government once. Where the citizens opt to not go out for a while because demonetisation. Where the couples aren’t going out because a proper guideline isn’t given to a squad which supposedly came into existence to protect girls, but in reality, is moral policing them. Where the slaughterhouses are banned without providing alternate solutions.

If a government is addressing a problem, it should work on the root level instead of taking a decision in a haste. Any government must work for people, ALL of them. The citizens must ask questions, important questions. Relevant questions that actually affect the development of the country and its people. Questions which will build the country and not push it 20 years into the past.

Stop, rethink. Are the politicians filling up their treasury really worth the death of compassion and humanity inside you? Are they?

I really miss Lucknow. The Lucknow I grew up in. This isn’t the place where I was born and brought up.

The guy who carries his talent in his name. Tasveer Hasan is one gem of a photographer. A one man show in the world of filmmaking and a box of many hidden talents. He occasionally suffers with a seminal outburst of words when the world overpowers too much of the hidden quarters in his mind. Otherwise, you would hardly hear him talk.