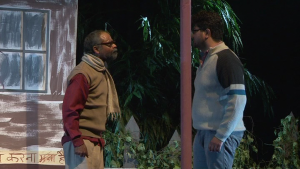 A tale of modern times, filled with all the captivating elements of theatre, from humour to adventure and personal sorrows. The play is an amazing take on the modern life and how the circumstances of everyday difficulties push us to do some unwanted things. 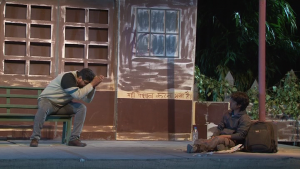 Three men on a desolate railway station in the middle of night find each other to be waiting for the train. A young boy, a middle-aged man and an old, white-haired man in his prime. The snippets of their conversation play with the graph of the narration, from comedy to tension, creating instances of character revelations and the intriguing moment, when the truth is revealed about their motives of being on the station. The amazing writing and the direction of Anil K Chaudhary make you hold on to your seats and for a moment stop being an observer to think and understand the shades of life at different stages. The platform becomes the final moment of epiphany for the characters as well as the audience. 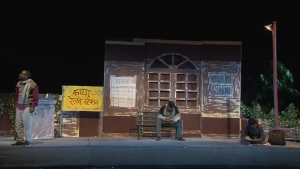 The entire duration of the play is filled with a realistic approach to the problems and the discovery of how every man plays the role of designated to him by the authorities and the faces of the society around them. The wonderful direction of Anil Chaudary and the captivating actors on the stage brought the stories of three nameless strangers to life on the stage and in the minds of the audience.