The Boy Who Learned

It’s amazing how sometimes when you look back at a moment and realise how much it has influenced you. I envy those authors who write about their lives, mostly childhood, as if they are holding out snapshots and describing their intricate details. Although, don’t trust a writer regarding the stories they tell. Even they can’t afford to tell the difference between the real and the fake ones. Their creativity muddles their approach to reality and they lose their grip over fact and fiction. But still, let’s give it a try.

So, there is a certain pattern of how someone’s behaviour emerges. I also have one such story for you, a small stroll through the backstage of my mind, to give you a quick glimpse of the expressions preparing in the green room before their performances, emotions working on the light and sound, crosschecking the technical details, highlighting all the cues and remembering the exits.

I was always a stubborn kid who never enjoyed school and as much as I try and want, I still can’t remember the exact reason behind such insolence and hatred towards something so fundamental. Perhaps, it’s because I was the first child of my parents, and though I was never a pampered brat (we never had enough money to pamper any brat) and the prospect of leaving home and going somewhere to spend most of my day seemed very alien and scary. How can one expect me to leave my parents and spend my time at a place where I have to learn things that didn’t make sense? School was the place where they introduced me to stories. Collection of words put together to stimulate images in your head so vivid that they often become a part of your memory.

(I still have images in my head of the Titanic sinking because we had a chapter on it in the fourth standard or the beautiful dense forests of Congo with the variety of birds and secret rivers that had been the nightmares for many explorers in the old times. Glimpses of a yellow lamppost standing guard in thick snow, as if fighting to protect whatever heat its small filament was giving out. That last one is from an excerpt of a book we had as a chapter in the fifth standard, The Lion, The Witch, and The Wardrobe. I never knew that it was an entire book. I don’t even remember the chapter. The part I do remember is the lamppost and the connection that my brain made when I first saw the movie.)

Being away from your parents, even for a few hours is not a good news for a four-year-old who knows the secret ways of getting the attention of his mother and hates responsibilities like watching over his infant brother who can start crying any moment for no apparent reason, when your mother is taking a bath. Also, it’s not a good idea to stifle his cries with a pillow. Yes, I did that.

Well, at least they never asked me again to watch over him again. We can sum it up as my initial reaction to responsibilities: cover it up and run out of the room. 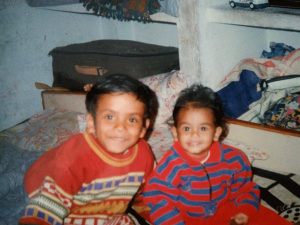 Me (on left) with my brother (Siddhant)

But then I heard my mother screaming. She had walked out of the bathroom the exact moment when I was running away from my moment of shame. She scolded me, no doubt. I still carry that guilt with me, I think. She explained to me the consequence of what I had done and made me realise how dangerous it would be. She didn’t yell at me because of what I had done. She shouted so I can fix it as soon as possible before something could happen. And she made sure that I would never repeat it again. It wasn’t the prospect of my brother’s death that interested me. I didn’t understand the concept of having a brother anyway. (A few days ago, it was just us three and now there was an extra noise in the house.) It was the realisation that I had made a grave mistake, something that could have had bigger consequences than I had expected scared me.

Running away from responsibilities is always easy when you don’t know the results of your actions or inactions, if you may. But at that moment I realised that knowing what’s going to happen isn’t always possible. We’re never smart enough to calculate all the possible outcomes and hence, it’s always the best idea to prepare for the worst. So, the best we can afford is to follow all the rules and be always ready to fix any problem you face. But never turn your face away. You might not know the damages you might cause. This is how I learned the values of responsibilities. Through attempted murder.

He struggles with a keyboard and tries to fill the empty paper on the screen; therefore, Divyanshu is a writer, who distinctly dislikes blogging, but sometimes pours out ideas that aren’t fit for novels, not even stories, but too long for a Facebook post or a tweet. He also suffers with social anxiety but continues to work in the social sector with Bewajah. As if that made any sense.